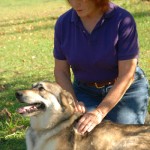 Animals benefit from spiritual healing just as humans do. Because of their openness and sensitivity, sessions for animals can be shorter than those for humans. Here are some case histories of my work with animal clients. There are additional stories in the Press section.

An abandoned kitten’s fight for life

One evening last June I was riding my bike on my usual route around the lake and as I approached home, something made me turn down a road I’d never taken before. Within a few minutes, I came upon a tiny kitten in the middle of the road.

There are no houses anywhere near that spot, so clearly this kitten had been intentionally abandoned there. He was filthy, covered with fleas, had a distended belly indicating worms and malnutrition, as well as a head cold; he couldn’t breath through his nose and wheezed so loudly I had to resist the temptation to call him Darth Vader. He also purred non-stop, so happy to have been rescued. I took him home and the next day took him to the vet. He was de-flea’d and de-wormed and the vet gave me nose drops for his head cold. He weighed just 1.7 pounds! 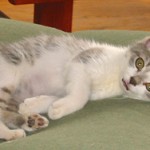 The first name I gave him was Shadow because he followed me around like one. Unfortunately, I wasn’t able to give Shadow his nose drops because they apparently burned and he literally turned summersaults when I tried. But I gave him spiritual healing every day and within a week the head cold cleared up and he started playing.

My original intention was to get him healthy and find him a home but, with the help of energy healing, my two adult cats accepted him and he is now a full-fledged member of our household. Five months after finding him, his permanent name became Paddy and he’d grown from a tiny 1.7 pounds to over 10 pounds!

Jenny is a five year old miniature horse who’s had a chronic cough since she came to live with her human companion, Susan, in June 2005. The cough got significantly worse in the winter months and Jenny got a daily antihistamine and, when the cough was very bad, a five-day course of steroids. Susan contacted me in January 2007 in the hopes that, with spiritual healing, Jenny could go longer between her bad bouts and, therefore, avoid the steroids. 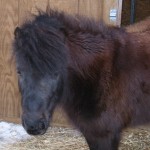 I started by giving Jenny 30-minute sessions for four days in a row, and then tapered down to three times a week for two weeks, then twice a week for one week, then weekly. Jenny clearly enjoys her sessions; usually dozing off after about 15 minutes and willingly following me into her stall when I arrive to treat her. Jenny’s coughing decreased dramatically after the first week of treatment; what used to be a daily occurrence is now only occasional.

During my work with Jenny I sensed that her coughing was related to emotional issues, and that she may also have been allergic to her bedding material. Susan confirmed that before she bought her, Jenny had been shuffled around from barn to barn and, when Jenny gave birth, her foal was taken away from her rather early. During my sessions I always use affirmations and I reassured Jenny that she was loved and had found her forever home. Horses are very sensitive to their environments, and can experience emotional pain and stress just as humans can. Fortunately, that sensitivity makes them very open to spiritual healing and emotional blockages are easily released. Animal healing also strengthens the immune system, enabling both animals and humans to cope better with any allergies. Susan experimented with different bedding, as well as consulting with an allergist, and today Jenny’s cough has been eliminated completely.

Belle is a beautiful 7 year old Golden Retriever/Pyrenese mix adopted from the Humane Society who turned out to have allergies resulting in fur loss and rashes. Her human caretaker, Marty, has worked with their veterinarian trying different medications and variations in diet which have helped for awhile, but the loss of fur and rashes always return. Marty felt animal healing might help and called me.

When I met with Belle, she started out hesitant as to who I was and what I was going to do so she stayed close to Marty. Once I started offering her healing, she came over and smelled my hands [a frequent response as animals can feel the energy coming from them] and lay down beside me. She put her head on my hand and was very receptive to the energy, and a few times rolled onto her back as if to show me her bare spots. After about 10 minutes I asked her if there was anything she wanted to tell me; Belle immediately got up and walked into the kitchen and stuck her nose into an empty glass bowl on the floor! It was the cat’s milk bowl [canned pet milk] which Marty usually shoos Belle away from. Kinesiology indicated the milk was good for her so we gave her some right then and there. Then Belle returned to the floor and let me continue giving her healing. Animals are very sensitive and intuitive and often know what they need, so asking them is an important part of the treatment process.

Since Belle’s healing session [and the inclusion of dairy in her diet], Belle has had more energy, her fur started growing back and her rashes are minimal. Energy healing strengthens the body’s immune system, thereby providing a line of defense against allergic reactions. I also referred Belle’s family to a holistic vet who practices Nambrudiped’s Allergy Elimination Technique [NAET], a powerful holistic method for eliminating the root cause of allergies. As spiritual healing is a complementary therapy, I always encourage clients to pursue all possible veterinary treatments for a well-rounded approach to healing. 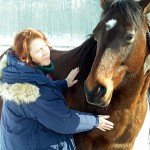 My friend Donna e-mailed me that her beloved 6-year old horse, Arthur, had been diagnosed with chronic to acute renal failure. He did not respond to treatments at the veterinary hospital so she brought him home for whatever time he had left. Donna asked me if animal healing might correct his physical imbalances and I explained that it could help relieve his stress and discomfort and therefore support his body in doing any healing it was capable of. I also explained the difference between a healing and a cure: a “cure” means a return to physical health, such as when cancer goes into remission. “Healing” brings the individual into spiritual, mental, emotional and physical balance, and may not necessarily include a “cure.”

When I first met Arthur his distress was obvious; his entire body was shivering and I wondered if we’d lose him that day. But when I started doing the animal healing session, he was very receptive, occasionally turning his head to look at me with what appeared to be an expression of gratitude. I worked with him for 90 minutes, the longest session I’ve ever given, because he seemed to need it so desperately. Fortunately, by the time I finished the first session, he had stopped shivering and seemed much calmer. During all of his sessions, Arthur gave the classic horse relaxation signs: softening his mouth, licking and chewing, sighing, falling asleep, dropping his hips and relaxing his legs.

I came to see Arthur every day for four days. In that time, his energy and appetite increased a bit, and his bowel movements improved from diarreah to cow pies to almost normal, but he was hardly putting out any urine, which is very serious.

When I arrived on the fifth day, it was clear that Arthur was in extreme discomfort, standing very still with no energy. The vet had just been there and the news was bad: Arthur’s heart rate was 68 [normal is 30-40], there was fluid in his lungs, he hadn’t been eating for the past 24 hours and had put out very little urine; tests revealed his kidneys had virtually shut down. It had also been determined that Arthur was born with a defective kidney and nothing could be done to turn that around. Donna and her husband made the heart-wrenching decisions to euthanize Arthur the next day.

I stayed and gave Arthur an hour treatment, after which he walked around and started eating, an indication that the healing session helped him feel somewhat better. I returned the next day and gave him animal healing before and during the euthanization process. 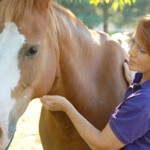 Twenty-two year old quarter-horse Lexi had severe bronchial problems for over a year; she could inhale easily but had trouble exhaling all the air and it often caused her to choke and heave. Eventually her breathing became so difficult that her veterinarian suggested putting Lexi down, because all the standard medical treatments and medications had not helped and she seemed to be in great discomfort.

Not wanting to give up without trying all possible treatments, her owner contacted me in October 2007. I gave Lexi five Spiritual Animal Healing sessions over the course of eight days after which she started to breath somewhat easier and seemed more relaxed; she even frolicked and played in the pasture, something she hadn’t done for years. After these first sessions, the vet returned to examine her and said she sounded much better than she did when he first examined her. He added that he no longer recommended she be put down and we should keep up the sessions. His actual words were, “Tell the horse whisperer to keep doing what she’s doing.”

While her breathing problem can now flare up under stress, it is greatly improved, along with her energy, attitude and arthritis. After the initial five sessions, we went to weekly and then bi-weekly sessions; six months later Lexi is on a monthly maintenance program and is now a happy, healthy horse.

“Working with Nancy is such a gift – I have been able to heal parts of myself that traditional therapy wasn’t able to reach. It allowed me to return to an inner innocence that hurt, despair and anger had been covering up. I highly recommend working with Nancy!” Sue B., Holland, MI

“Nancy’s healing work has deep caring and clarity. One is aware of her willingness to step aside and let the Divine move through her. Afterwards, I felt vibrantly alive and relaxed.” — Patricia D. Psychotherapist/Counselor

“Thank you so much for your time and energy during my recovery from surgery. Your healing work made a huge difference in how quickly the recovery process happened and each treatment left me feeling stronger and more renewed.” — L.M., Kalamazoo, MI

“Nancy has a delicate and intuitive touch with her work that can only leave one feeling clear and renewed.” — M. McNeil, Topanga, California, www.TheMagicOfHorses.com

“My horse had serious respiratory problems for a year and conventional medicine was unable to help her. She was in such distress that the vet recommended putting her down. After four sessions with Nancy, her breathing improved significantly and she has become more energetic and playful. She is alive and well today and the vet said to keep doing what we’re doing.” — Beth R., New Hamilton, MI